know this has been on here a lot and been debating getting another one for a while.

But this morning I had such a close call on the motorway when some idiot just changed lanes and I’m not kidding when I say my front wheel brushed his bumper that I feel I need to get another one as I’d have reported that one is was so bad.

So, budget ideally around the £200 mark. I’m crap with electrics but equally not a fan of wanting to bolt one to my crash hat anymore.

I’d say bolt one to your helmet, for simplicity.

bolt one to your helmet

It’s about time there was a greater range of availability of helmets with built-in cameras, rather than having to bolt lumps on.

From experience, best fully comp insurance you can buy.
All the rest is pretty much relative.
I know you’re a pretty experienced rider so I wouldn’t bother with 'expect the unexpected ’ advice

I have the BlueSkySea DV988 Motorcycle Dash Camera was £110 off eBay, now £140. It comes with GPS, G sensor, front & rear cameras which I’ve attached to the underside of nose cone and underside of top box plate. Fitted myself 11 months ago and have had no issues. Its all virtually plug and play, there are three cable connections to make red to battery positive, black to battery negative and white piggy backs off a switched live so you will need to crimp a couple of ring terminals for the battery connection and may be a scotch lock or a piggy back connector and spade for the white cable.

if budget is your thing them look at SJ action cams

I use a Ghost XL camera on my hat. £150 and a 9 hour battery, but you cannot remove the battery.

I prefer a hat mounted camera, so that whatever I choose to look at, like the driver next to me at the lights texting away, it is recorded.

If a car hits you from the side, a camera mounted to the bike will see nothing.

Front and rear cameras may miss the moment of impact but they will capture the before and after footage and will clearly show how and where you were riding leading up to the impact. The camera footage will clearly identify who is at fault which is all you need it for.

I have a bullet cam rear-facing and a Drift Ghost front facing, both mounted on the bike.
I think that although I see “curiosities” in front of me, possibly the more important camera is the rear-facing one.
Certainly the occasions where I’ve pointed to it when a driver is tailgating me have been extremely effective.
More broadly it amazes me that, with the odd exception, neither cars nor bikes have this kind of stuff built in as standard. “Dashcam” feels very 1990s! A “dashcam” you must plug in and manually attach to the windscreen or mirror, come on! But then we’re talking about an industry that does virtually nothing to stop “keyless cars” being scanned and nicked by car thieves. “Security? What’s that?”
On the other hand my recent experience of uploading decent bike cam footage of serious driver offences to the police (eg car driver using phone while driving one-handed on dual carriageway in rush hour, doing lane-changes and undertakes while on the phone) indicates they have little resource available to make any use of it.

Really, your driving and/or riding is that faultless you can do that?

it amazes me that, with the odd exception, neither cars nor bikes have this kind of stuff built in as standard

At a work event several years ago there were many manufacturers present and this was discussed. Their concern was if they fit it as standard it may put some customers off buying in case they do something wrong and end up getting prosecuted by a camera in their own car.

I think some Corvettes have them as an option and of course a Tesla has more cameras than a film studio. 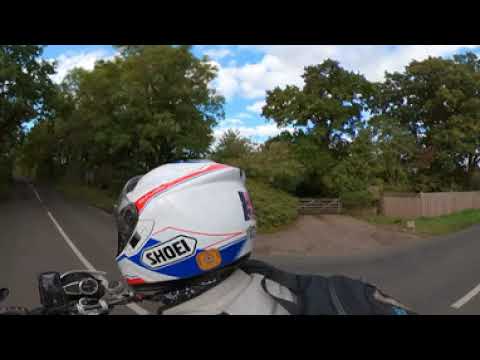 @nivag Wow Gav, I didn’t realise that the viewer could look at any angle. I thought that was just for the recording and setting up of the video before publishing.

Depends how you export it.
You have a single angle shot if you wish.
Same video as above but “locked off”

You can also create a video that’s flat and then rotate the view around to your choice.

What camera are you using there?

I have the Insta Go 2 and the battery life is pants. How does the One X2 behave in real life?