As I’m working in the city again in a few weeks need two wheels.

Took a trip over to buy the parts and realised that the current deals on the SV650 are quite good.

Long story short… Pick this up next Friday, wouldn’t be my first choice but cheap, fairly reliable and still a hoot. Will be seeing you all on some rides soon! 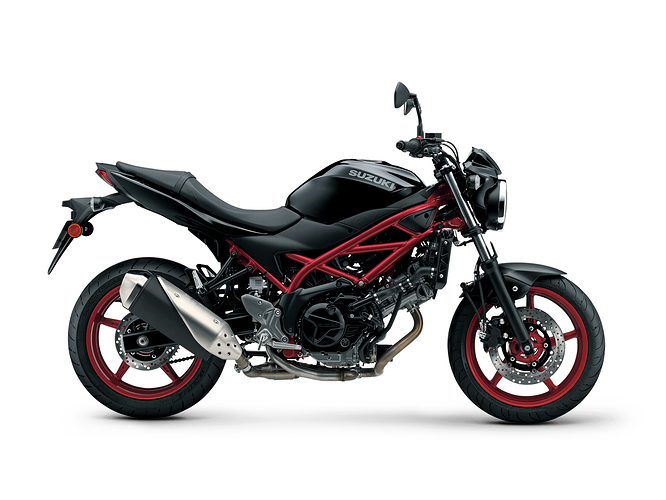 And still capable in the lanes for some fun, will be upgrading the suspension pretty quickly

A MIVV can keeps the pedestrians at bay, (my commute is into city).
And they really are fun, I took mine round the IOM, many times, one year.

My SV is my wok horse. only have one bike (clearly a pauper on LB as everyone else seems to have more than one). but I still love it, just had a good ole service and now she’s back to normal. Love my SV still…

That’s a good looking bike Curtis.  I don’t know why, but the first thing that came to mind on seeing it was “Batman”.

Did my test on an SV650, I quite like them as a workhorse. If I end up having to commute into London a couple of days a week then I’d consider one for that.

Same, did my test on an SV. Powerful and robust bike

When the time comes for a new bike, might look at that, if I can get past the no fairing thing.

Got kind of used to the wind deflection on my 990

Annoying though that you need to pay extra for pillion footpegs? A bit ridiculous, no? Ok only 25 but still…

Comes with pillion foot pegs as far as I’m aware?

oh right, it does… sorry I just saw it in the extras and then couldn’t see it on the photos on the site so made an assumption!

Basically the extra is if you want the black, better looking ones…

Sorry, will go back to my workday of looking at cat videos

You at snett this weekend?

Afraid not mate. Working Saturday and prior arrangements for Sunday.
Race bike is coming back together though, should be back on track later in the year hopefully

Afraid not mate. Working Saturday and prior arrangements for Sunday.
Race bike is coming back together though, should be back on track later in the year hopefully