Are there any good roads in the South Downs?

I did this route today. It looked ok but was mostly arse. I seemed to have found every 40mph zone and strung them together. There were only one or two highlights. I know about the 272 and I think it is the most over rated biker road I’ve ever ridden. 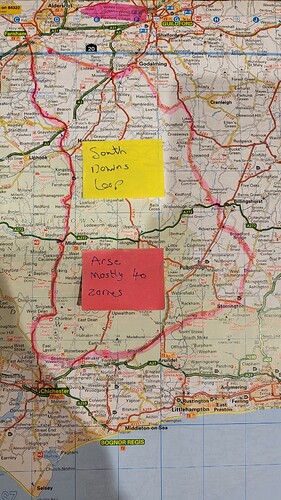 It is what it is and is widespread across Surrey and all the home counties since the introduction of the Traffic Management Act (TMA) in 2004 which empowered local authorities to set local speed limits lower than the National 30’s and 60’s. It was slow to kick off but since local authorities are allowed to keep a percentage of the revenue stream from speeding tickets it is gathering memento with the reduced inner city 20 mph limits and rural area 40 mph limits being policed by speed cameras to protect us from ourselves.

The end is nigh when we’ll be reduced to getting our kicks at 25 mph on E-bikes and E-scooters.

A bad example of the Department of Transport (DfT) vs the Local Authority (LA) setting the speed limits is the A9 in Scotland. It seems that where the speed limit is set by the DfT it is set at the National Speed limit of 60 mph on the single carriageways and 70 mph on the dual carriageways, where the speed limit is set by the LA it’s 50 mph with average rear facing speed cameras. The end result is every couple of miles the speed limit changes from 60 or 70 down to 50 then a couple miles on it changes back from 50 up to 60 or 70. The road signage suggests that it is some form of experiment involving increased speeds for HGV’s but don’t be fooled, the average speed cameras catch all. Taking your eyes of the road to enjoy some of the scenery can be very expensive.

can be very expensive

Is that the voice of experience?

Last year I set the Garmin to find curvy roads in the region and all it found was 40 zones. Must be the whole of Surrey and Hampshire. Think I’ll go to the Cotswolds next time.

Sorry but what are you on about? I now live in Surrey and I don’t see the issue. Standard speed limits mostly everywhere.

Except for all the 50s and 40s all standard.

Really! I love that route one single winding road. The downside is if you are on it on a busy day its crap because it slows you all the way down especially if there is a 4 car string in front of you. But after you do it a couple times it can get boring.

I have done most routes in that area and a few decent roads for an hour or so blast but if you want anything more you will need to go further out. Last weekend I did a loop into wales looking for The Baffle Haus cafe, and took the A40 all the way back to Reading and that was fun. Shit on the way, cause it was num bum M4 all the way and GPS didn’t register my waypoints so completely missed the cafe

You can also try the A4 into Bristol not winding but a few nice fast points. But most roads in that area with a 60 or 70 will be dual carriageway A or M roads.

You can explore between High Wycombe and Northampton, not South downs but ok enough.

Ebikes are limited to 25kmh, so 15.5 mph (before it becomes a bicycle)

15mph on an Ebike? I think I had more fun as a child on my skateboard at 12mph. Mind you, I did have my dog on a lead getting me up to that 12mph