Luckily a copper was there by chance seconds after it happened and controlled the situation ( some jumped up tossbag saying i was unreasonable for being pissed off about a. being trapped under my bike and b. the damage). Seemed rather put out that i wouldn’t take 50 quid :jerk:

Turns out the car that was being towed had a prohibition notice slapped on it half hour before… also transpires that 2nd polish guy driving the towing car showed on the PNC as having no insurance, so this could prove interesting…

Coppers in attendance was very helpful and was also a biker.

Damage - clutch lever, broken mirror, bar end, scuffed plastics and bent peg. As luck would have it I had a clutch lever under my seat so was able to ride home. 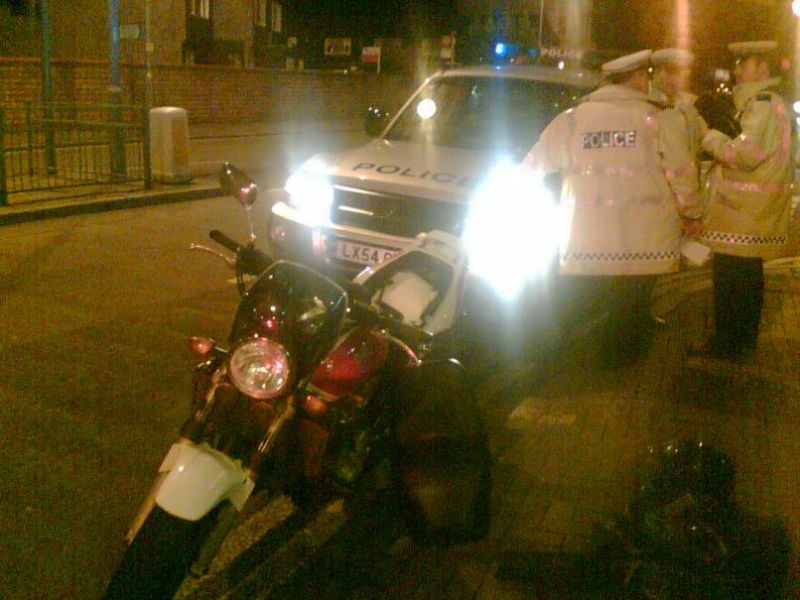 HArd to bear mate, hope the bike gets patched up quick. No expensive fairings at least! And I bet the cops were interested in the prohibition notice, althought the lack of insurance is a worry.

You mean, the police were nice to you, and helped you out… heh good for somethings at least…

Biggus… Really sorry to hear about this… Sounds to me that you were just unlucky, but also lucky that the police were there at the right time… Hope you wern’t hurt with the fall mate?

hey man, if the coppers werent there i doubt those guys would even have of stopped…i hope it gets sorted out soon

also transpires that 2nd polish guy driving the towing car showed on the PNC as having no insurance, so this could prove interesting…

Actually, that shouldn’t be too much of a problem as there’s the MIB (IIRC) which is specifically for paying out to people who were involved in an accident with a thrid uninsured party

Ah man, what a bummer! Like others have said, wrong place, wrong time! Very good that the Police were there, this’ll save you a LOT of hassle. Hope you’re okay… Keep us informed of how it goes.

Will be getting insurance comp on the case asap, at least i could make the Charity ride today - we raised £570 for Moment-um, based at Kingston Hospital and donated games etc for them too.

Nice to see your not to hurt apart from the “bll*ks and ar$e” lol. Hope it shouldn’t be too bad getting the bike repaired and take the guy to court and squeeze some money out of 'em!