Well gang, what a night of highs and lows ! I hope everyone got back safe and sound.

Up at the Ace, met up with a load of the guys, and had a good chin wag. Things were a bit subdued as the Traffic cops were parked up, so no fun and games to watch. Then it was off to the Bridge.

Arrived at Chelsea Bridge and all was going well, bit of a Traffic Police presence to begin with and then they found better things to do things livened up and then there was one very enjoyable chap giving it large. It was a bit noisy but no worse than normal really. We all then decided to head off to Frith Street.

some absolute TOSSER chucked an egg which hit the back of my bike, just by the grab rail, exploded sending gooey egg all over my baby and my back … even on my lid !!

As you can imagine this upset me a bit, but after a bit of cleaning off (got paper towels from the Tea Hut and the bloke reckoned it was definately residents of the flats, was also helped by the guys), we then went to leave again.

Then another was thrown just missing Wiggetta and Smiled on their bikes. I saw this one incoming and the general direction was from the biggest block of flats (2nd one in from the bridge) and the 2nd set of balconys (the first set after the set on the corner). The egg came from high up, at least above the fourth floor from the angle it came flying down.

By now Trojan was jumping and less than impressed !!

Called Local Plod down and spoke to them, they are going to record it so that it will be able to be used if the Police are asked about any incidents concerning the Flats and bikers … could be good ammo for us if the residents paint themselves to be angels and say the bikers are all bad.

Will clean my bike in the morning and see if there are any scratches etc, if there are then it will be reported as a criminal damage tomorrow.

After I calmed down I then went up to Frith Street and met the rest of the guys there.

We then went to Leicester Square and watched the world passing by, a lot of good and not so good sights !

Apart from that … what a cracking (no pun intended!!) night and thanks to all the guys and girls that were there.

See you all at the next one and hopefully it won’t be so eventful ! 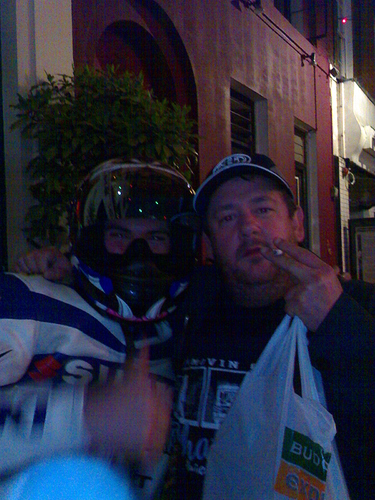 Glad to see there are childish millionaires out there, what a prat. Let’s meet up there next Friday and throw egg’s at Range Rovers!!

doh, sounds like I left at the wrong time!!

nice to meet you guys anyway

ooooh sorry to hear about the egg tosser Trojan…

but yep as always good night… so Shane and Oodie tell the truth did you get that woman’s number after all the photos she was taking of you guys it seems only fair, you flirts!!

Vinnie really sorry to hear about your accident and i hope that you get better soon!

i knew i should have stayed out

twas a good night, very Eggciting, we had a laugh and a Yoke about the EggGate incident.

Next I’m gunna put a sign on the pavement saying

“I’d like mine scrambled with 2 rashers of bacon please”

Don’t let the barstewards get you down mate, It’ll catch up with them soon

well…what a good night apart from the misshap’s…will def want to do that again at the square…and me bezzy mate…jhonny…what a crack…he had me rollin!!!..lol

rizla sv…great to meet you hun and will have to meet up again soon…your such a good yapper !!! love it!!!..lol

Well, they say it happens in threes !!!

The third thing to happen to me this weekend was …

Whilst sitting at the red lights half way up Whitehall by Horse Guards at about two this morning, some twat in an Audi TT rear ended me ! Thankfully he hit the anchors at the last moment, heard a screech of tires and then me and the bike were catapulted a couple of meters forward.

I will just thank god for letting me stay on the bike and not dropping it … don’t ask me how I managed it as I haven’t a clue. Bloody thumb hurts though !!

Thankfully the front of his motor was low and he just struck my tyre and nothing else. The impact managed to break a couple of bits of his bumper though

Cheeky sod got out and said “what happened” … after a few choice words he said get the Police !! Warrant card produced and said you’ve just hit one !! Police (well PCSO’s turned up) and recorded as a damage only.

No apparent damage on my bike and the ride home after it seemed ok, will have a proper look over it tomorrow morning … just worried about allignment really.

What a weekend and it’s not even over yet !!!

Hi there. Spoke to you just after in frith. Looked lucky there, comming up to the lights i thought that something worse had happened but then passed a glance and all was ok then you came to frith. Glad alls well anyway. TSM

TSM, sorry mate, didn’t recognise you from the few meets I’ve been to before.

yeah, all was fine at the point you guys past, things had calmed down and the PCSo’s were there. Cheers for slowing down and checking though mate, appreciated.

Smiled, cheers mate and appreciated. It could have been so much worse for me and my bike !

Won’t make it Wednesday, got a lot of drinking to do that day. Will be back out and about on Friday, all being well though. Don’t want any eggciting moments though !