Apparantly its thatchem approved too… 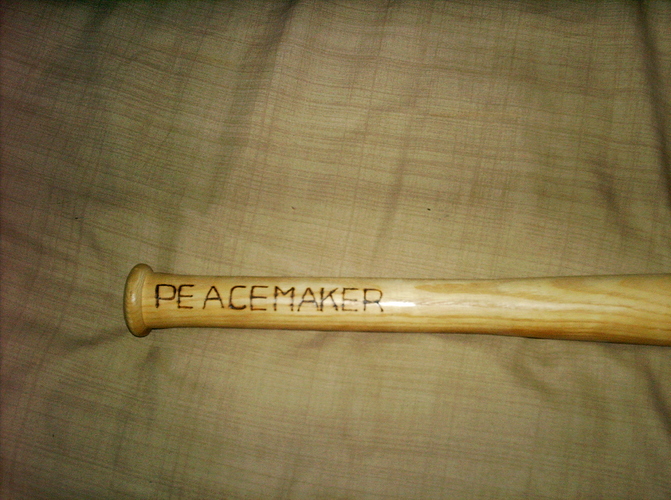 The aluminium jobbies make a nice “boing” noise when applied though. BUT these wooden ones make a nice reverbrating “thwack”. I’d certainly add this to the Thatcham list of goodies I use.

No home should be without one!

try these… hopefully you might blow some thievin pikys foot off…

12 BORE ALARM MINE.
The most shocking alarm available anywhere. A loud blast from a 12 Bore shotgun blank is triggered if the perimeter trip wire is breached.
Not what your average thief would expect!
Reviewed by local, national and international magazines and TV programmes. Here are just a few extracts:

FHM magazine, May 2001
‘’Now, however, comes the brilliantly named Alarm Mine, which will make the light fingered-chap soil his pants with fear and hand over the telly forthwith.’’

Performance Bike Magazine
“Poo in the pants time for thieves”

I could have some fun with them…specially after Adam H has modified that for me !

The cheapest people to get alarm mines from are Henry Krank a firearms dealer in yorkshire. £8 They only do discounts for 100+units

Probably best not to pep it up by fitting a normal 12 bore cartridge as you are unlikely to get a clean kill . . . . and any thieving scum even vaguely close to the 12 bore blank as it goes off is going to leave forensics quite a lot of smelly brown DNA sample

Is there some way of stopping it peppering the bike tho ?

Real shotguns wired up to a trip wire would be good. Blow the c*&ts legs off!

What, the “smelly brown DNA sample” or are you hellbent on fitting a real cartridge…