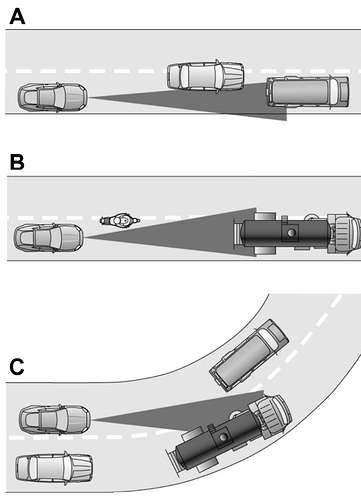 Care out there people. Most new vehicles have adaptive cruise control, which encourages drivers to set a speed and drive under the belief that their car will brake/stop, without their input, to avoid a collision with any car in front. This tech may not spot bikes filtering or centered in their lane. Unfortunately this tech is popular in newer cars.

Yup, alot of this new tech scares me, not because of the tech but the reliance people put into it…

All good manufacturers saying the driver’s still need to be alert, but tell that the the poor sods spread over the roads!

They do but then the advertising makes it look so good and those notices are usually just in print and who ever paid attention to a manual?

which encourages drivers to set a speed and drive under the belief that their car will brake/stop, without their input

Which brings to mind the recent viral video of a Tesla steaming full speed into an overturned HGV in lane 3 of a motorway in China. The car’s systems completely failed to see a stationary HGV in its lane. 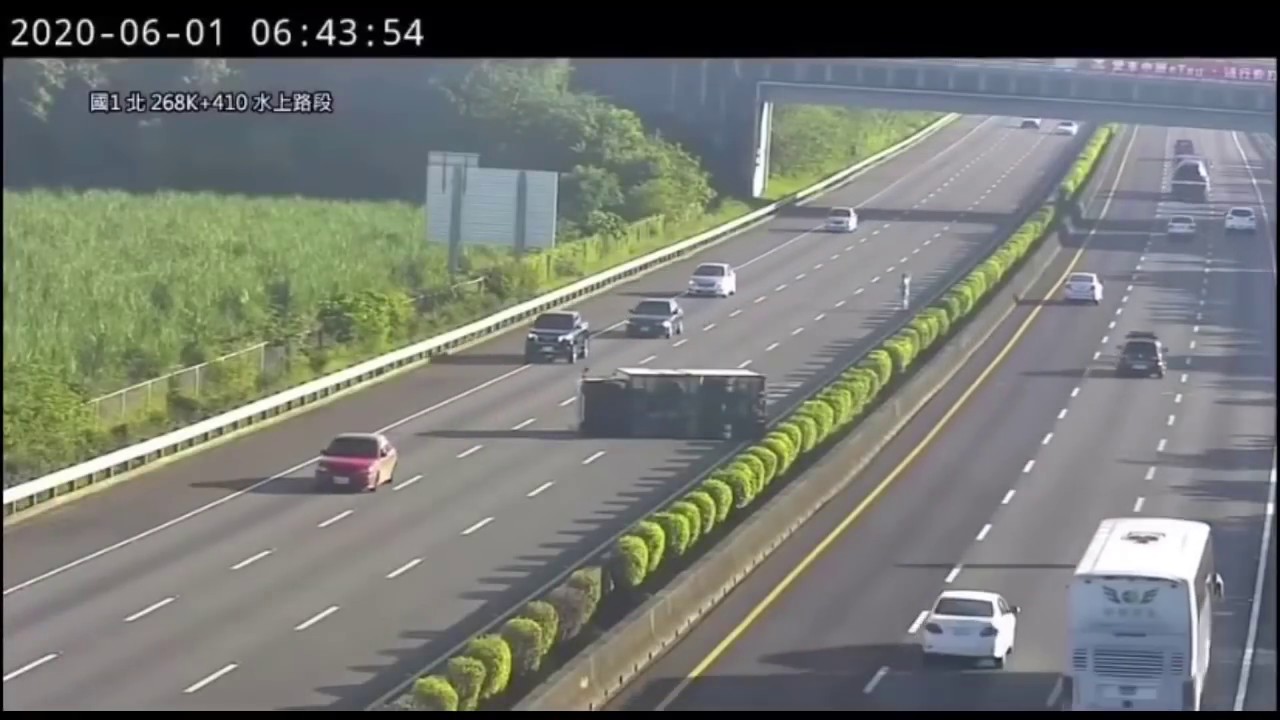 Maybe the man hastily waving his arms distracted the autopilot. No excuse for the Tesla driver though. They were either asleep or on their phone.

Nice of the driver who was just involved in the accident to try and help others. He put himself at huge risk.

Wow that’s a lot of stupid right there.

That crash is mental, how the hell did the driver just not hit the brakes beforehand…
Though the next few vehicles didn’t exactly slow down enough when approaching.

You see a puff of tyre smoke where the autopilot sees the man on the carriageway - too late to do anything about it, but it obviously sees him and hits the brakes. Then it releases them again as it passes him and completely fails to see a chuffing big truck.

Yeah, and the driver had to be on the phone - they will be.

I had a weird one the other week I was driving along paying attention as always when all of a sudden I saw a silver golf 100 yards in front of me sitting in the outside lane missing its front two wheels. It would have been visible from at least 1/4 mile back but I simply hadn’t seen it I can’t even begin to explain how shocked I was to have missed it. I was in the inside lane so it was a few lanes over from me but I should have seen it, I have no idea where the wheels went even now but they definitely could have been in my path was towing my trailer at the time as well so had to be extra alert. So anyway it can happen although I’d hope I’d have seen a truck. If it’s lying on it’s back though and all you see is the white top of the cab and curtain awning I think it’s possible to miss - def if driving into a low sun. All I can say is the silver/grey of the golf was easily filtered out by my brain - it does happen. Explains a lot of smidsys - there’s a fortnine vid on it

Another one is the wing mirror blind spot warning. I once assumed a driver knew I was filtering past because I saw their wing mirror turn from orange to red as I approached. She hadn’t and that’s not an assumption I’ll make again. Wasn’t remotely close, didn’t even warrant an exasperate wave of an open hand in her direction but it made me reconsider a subconscious assumption

It never ceases to amaze me how many riders in London sit in drivers blind spots whilst they decide/wait to see if it’s clear to filter past.

I drove an Alfa 164 for several years. It was a relatively big car (at the time, small these days) and I remarked at how other road users gave it room. Perhaps its presence on the road made a statement but then it might have been the colour, it was white when there were very few white cars on the road. It wouldn’t have been my first choice of colour but buying used, with my budget, I didn’t have any choice. At the time police cars were white - jam sandwiches - so I think people often subliminally saw it as police.

I replaced it with a silver 156. Roughly the same sized car. After three scary SMIDSYs - luckily no contact, but clearly drivers who hadn’t seen me and just pulled out, or changed lane - I learnt that my ‘concrete grey’ car was invisible. I kept the headlights on after that.

I’ve been looking at alfas non stop recently really fancy a 164. I’ve just got to try that v6 at some point

I’ve owned dozens of cars, and mostly Alfas, and of all the previous ones I miss the most it is the 164. It’s actually a small car by modern standards but was a 5-Series competitor in its day and can comfortably carry five and luggage while retaining the agility of a Golf MkII. In fact if you know the old Golfs, it really does handle like one. It was the first car I owned that I could drive all day and step out of feeling relaxed. In fact it probably was the best of all my cars because although I’ve had more modern ones since, they all have lower and lower profile tyres and lack the long distance comfort of the 164.

It was also the quickest car from a standing start I’ve owned. There was something about that old-school 3.0 litre 12-valve grunt mated with an auto box, which helped prevent wheel spin, that made it leap away. Anyone used to a motorbike will know how dead normal cars feel in this department but the 164 could effortlessly out-drag all comers.

I would love another 164 but it would be a very brave person to buy one now. Parts must be impossible and although they were better protected than the rust buckets of the '60s and '70s they are all very old now and must need full body restoration. Even a 166 would be risky, the youngest of them must be 15 years old, and again parts must be a mission.

I’ve looked at a few classified ads recently and people are starting to ask cheeky prices for them. Who knows, maybe they will go up. I actually gave mine away, it was worth peanuts at the end and rather than see it go to a scrapyard on a part-ex I handed the keys to a friend who managed to eek another few years out of it. He too had fond memories of that car.

Yes this was what put me off, on paper a long running version of the busso engine line and being part of the type 4 platform I was hopeful but then was surprised to hear how hard it is to get parts, considering how easy it is in general to get parts for my old saab. That and they’re bleeding expensive! Just a pipe dream

Wow. That’s probably more than they were new. 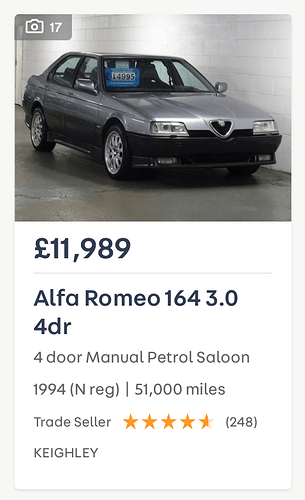 Another one is the wing mirror blind spot warning. I once assumed a driver knew I was filtering past because I saw their wing mirror turn from orange to red as I approached. She hadn’t and that’s not an assumption I’ll make again. Wasn’t remotely close, didn’t even warrant an exasperate wave of an open hand in her direction but it made me reconsider a subconscious assumption

I’ve started using them lights to remind me I’m in dangerous place.