Adaptive cruise control has been coming for a long time now to the two-wheeled world, and in the past couple of years we have seen more than a few European brands playing with the technology (all of which are likely working with Bosch to integrate this feature).

Already a staple in the automotive industry, now adaptive cruise control comes to the motorcycle industry, with BMW Motorrad being the first company to feature the tech on its bikes. 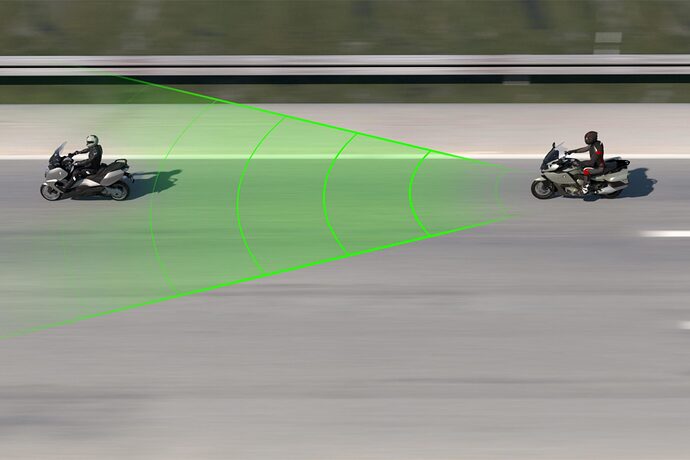 Adaptive cruise control has finally come to the motorcycle industry, and BMW Motorrad will be first to offer the system developed by Bosch.

Never fall behind on a rideout again. Looks like a winner.

Hmmmm wonder how it works mid corner, leant over?

“Another feature to point out is that the adaptive cruise control will also augment itself during turns, when it is necessary to maintain motorcycle stability when leaned over.”

Considering how good the Bosch cornering ABS/TC is, I would imagine adding CC to this would be trivial. Pretty awesome tech. Great for touring.

Don’t we ride bikes because we enjoy riding bikes, ie. being involved in the control of them , making decisions & using our experience to anticipate what’s likely to happen ahead & if necessary, reacting to circumstances & the situation as things change.

With this stuff, you may as well just go on a coach tour!

Yeah, for the most part, but sometimes you gotta ride on motorways to get from nice road to nice road, and adaptive cruise control would be nice for those times. They’re also a safety feature, they’ll brake when you don’t see something.

gotta ride on motorways to get from nice road to nice road,

Especially those of us London Bikers who live in London. Any countryside riding for me involves a plod out of London on motorways to get to the twisties.

My Ducati doesn’t have any form of cruise, they probably thought it was sacrilegious to put it on such a bike, but when I have motorway plodding to do, I really miss it.

I always used the cruise control on my BMW and KTMs. Takes away a lot of the monotony of motorway riding and also the temptation to speed.

also the temptation to speed

I love cruise control and have had it in every car I’ve bought for years. The first time I experienced it, and realised how much it reduced my propensity to speed, I started thinking that insurance companies should offer a discount for cars/bikes fitted with it.

Riding a motorbike is sometimes transport rather than thrills and rideouts. In those situations anything that makes it more comfortable is welcome, providing it works!

Cruise control is brilliant in a car when going through a camera 50mph stretch on a motorway. I hear people set the cruise to 54 or 55 then just steer.

Yup although I always set mine to 50

That is when I’m in rented cars. My car doesn’t have cruise control

I’ve just got a bike with cruise control, and yeah it makes average speed camera sections much less stressful