Looking to purchase in a few weeks and have to park in a drive way every night. Planning on using 16mm chain, ground anchor, and anti-pinch pin.

I asked here previously how to secure the bike properly, as I chained one through the wheel before and they took the wheel off and took the rest of the bike.

I was told on here to put the ‘pin’ through the rear of the cylinder block (where the RIGHT circle is). I had a look at the bikes up close at my local dealer (Doble), and the bikes had some sort of tubular sensor in the way with some thin wires sticking out of the top - so this is a no go as even if I fit the bar through, damage would be caused.

I asked the dealer for a recommendation and explained how I planned on locking it, of course he first told me to lock it through the wheel. Idiot. I told my story and he then said ‘oh’, and looked over the bike, and came the the conclusion that putting the bar through where the LEFT circle is would be very secure and that even if they undid those nuts, would be unable to get the bar out without freeing the whole engine, which he said was a massive task.

I would like to know if this is true, and thus very secure? Alternatively, any other ideas are welcome. I hate thieves so much! 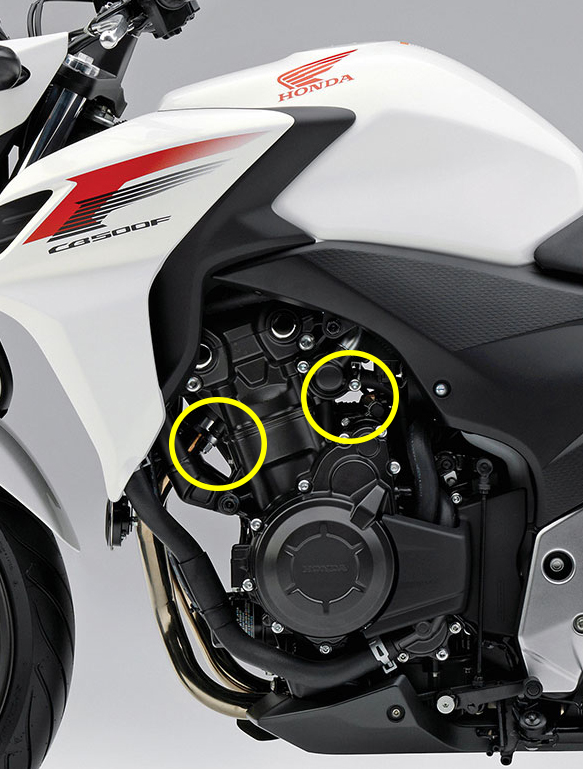 I would agree that the left hand hole would be fine, as long as that part the bolt is in can’t hinge forwards.

A good tip is to get an Oxford Stormex cover and lock it down using it’s locking loops at the front and back of the bike. Getting the cover off even with the keys is a total ball ache so they will probably look elsewhere. It also may go un noticed under the cover.

A good tip is to get an Oxford Stormex cover and lock it down using it’s locking loops at the front and back of the bike. Getting the cover off even with the keys is a total ball ache so they will probably look elsewhere. It also may go un noticed under the cover.

As above do get a cover too. It’ll protect from prying eyes as well as the weather.

Doesn’t have to be an expensive cover either. I used a cheap as chips £10 cover to protect the Bonne from the weather and prying eyes recently. Had it out in all weathers from October through to January and it remains as good as new.

Shouldn’t the pinch pin go through the swing arm, therefore making removal of the wheel impossible?

Depending on the bike. The pinch pins design is to allow 16mm and 19mm chains to be used to secure the bike through the frame, swinging arm, rear axle etc. Wherever you can poke a 23mm bolt through.

Simon will be along soon, he’ll explain it better than me. Note PJB don’t do ant pinch pins

Okay thanks guys, seems like this is my best bet then. By the way this bike had a solid swing arm (without a hole that is) so not possible to use pinch pin there.

I agree a cover is a good idea, just another pain in the arse each morning and evening though.

Thanks, if it gets nicked I think I will totally flip out!!!

Not sure I understand… you’ve had a bike nicked before… and would “flip out” if you had another one stolen… yet you’re giving a really good chance of that happening again by buying a new bike and keeping it chained up outside in London.

The logic. I just don’t see it.

What do you suggest he do? Take it into the house every evening, maybe leave it in Surrey at night?

Blade just posted this on fB

*** NEWS *** Honda recall CB / CBR500 range
Honda has announced a recall of thousands of their popular midrange series of bikes based on the same 471cc twin cylinder motor. The recall appears to be world-wide and includes machines sold in Japan, the UK, Australia and the United States.
A Honda UK spokesman said: “There is a recall on the 2013YM CB500FD/FAD/XD/XAD,CBR500RD/RAD models, relating to the rocker arm shaft sealing bolt. Standard recall procedures are underway.”
The recall notice says that due to “an incorrect procedure during manufacture” of the rocker arm shaft sealing bolt, it may come loose causing oil to leak from the CB500’s engine. “If the oil leak is undetected or unrepaired, loss of engine oil could cause engine failure or seizure,”, a spokesman confirmed. Reading between the lines, it seems in some cases the bolt has fallen out altogether, resulting in the rocker arm shaft becoming dislodged.
In the USA the NHTSA says: “A loose bolt will initially result in a slow leak of engine oil, but if not addressed, the bolt can come out of the cylinder head entirely. CONSEQUENCE: Without a bolt, the engine will have reduced power which may result in a stall, increasing the risk of a crash. REMEDY: Honda will notify owners, and dealers will replace the rocker arm shaft retaining bolts, free of charge. The recall is expected to begin in March 2014.”
Visordown states that bolts retaining the rocker arm shaft may not have received the correct anti-corrosion treatment during assembly and could work loose, although we’re not quite sure how that could happen from an anti-corrosion treatment.
The recall affects 2013 model-year CBR500Rs, CB500Fs and CB500Xs, all of which share the same 471cc parallel-twin engine.

What do you suggest he do? Take it into the house every evening, maybe leave it in Surrey at night?

Not buy a new, attractive, expensive bike unless you can garage it? It’s not rocket science. Sheesh, what is it with you lot wanting your bikes nicked!

It’s perfectly sensible to ask a question about security, but it’s a sad day for biking when the guy’s taking flak because you think he’s daft for buying a modest middleweight commuter. We might as well all sell up and buy little Skoda Citigos, and leave biking to the continentals :unsure:

I reckon in a lot of cases it would be a darn sight easier to bust open a flimsy garage door than to cut through 16mm thick case hardened chain.