No, it isnt the GP star but a Swiss adventurer.

The 47-year-old ex-military pilot, who calls himself ‘Fusionman’, flew his wing at a height of 2500 metres above the town of Bex in western Switzerland.

He performed various aerobatic manoeuvres before deploying a parachute and landing safely.

His 2.5 metre ‘wing’ - perhaps the ultimate big boys toy - is fitted with four jet engines, which are ignited before he jumps from a plane.

Once in full flight, Rossy can hit speeds of up to 300km/h, but can only stay in the air for 10 minutes before the fuel capacity of the small jets runs out.

This is the second version of Fusionman’s wing, after losing control of the first during a jump in 2005.

awsome i want one

That is absolutely fantastic. I want one too, or at least a go on someone else’s!

I THOUGHT YOU MEANT THIS ONE!.. 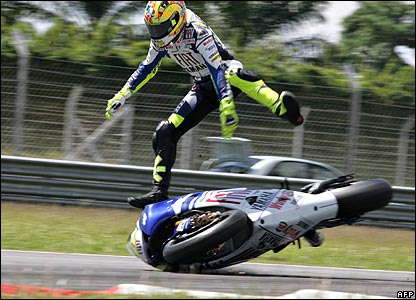 I want it, I really want it!