Headlining the changes to an already potent powerplant is a boost in midrange torque brought on by a more efficient fuel-injection system. This system features 43mm throttle bodies with dual throttle valves, and its new “ultra-fine atomizing injectors” are claimed to offer improved combustion. An interesting change to the new ZX is a heavier flywheel that is said to smooth the ferocious powerband of the previous engine, aided by its generator that moves from behind the cylinders to the crankshafts end, further adding mass to the rotating assembly. Revised engine-management mapping is claimed to reduce abruptness in throttle transitions, such as when reapplying gas when exiting corners, and a higher swingarm pivot location will theoretically transfer power to the rear tire more effectively.

I say its looks bugly, but each to their own! Really don’t like the new headlights 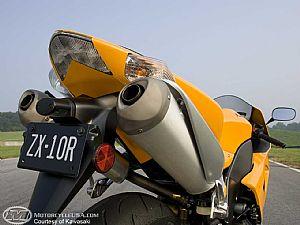 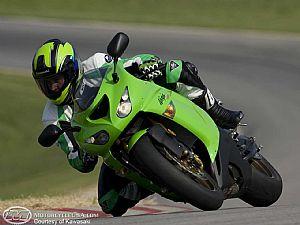 Sorry, not a fan would take the current zx10 over that anyday.

Sorry, not a fan would take the current zx10 over that anyday.

yea same ere, i really do not like the look of the new one

God! They got it all wrong! Perhaps the old version should go up in price? lol

Ow, I don’t like that! Has a hint of R7 in the headlight arrangement, and that new Yamaha MT01 (?) torque-sports bike at the rear! What the heck!

mmm another vote for the current one here…

I like that very much. I actually think the current ZX10R is a lot ulglier but then I love yellow bikes so what do I know?

One thing have just noticed the tail piece has been taken from GSXR1000 K5 and put on the back of the ZX10! Copycats!

Agreed, prefer the current model to that. What the f…k have they done with those exhausts? The back looks hideous. The front does not look too bad, not exactly different to anything else really. Perhaps they should go back to the ZX7 lights, that would make it stand out a bit more. Improvements in power delivery sound interesting. I shall reserve further judgement until I have seen it in the flesh and ridden it.

You’ll have to be quick then mate, only 500 are going to be distributed worldwide… lol

which ferocious powerband is that ?

ive got a 10r and its gutless!

my 9r roadbike pulls your arms out of your sockets, whereas my 10r just pulls as smooth as a turbine

Will reserve judgement til I’ve seen it in the flesh (plastic). Can’t really make my mind up from pictures alone as I’m often wrong!!

The current bike look great, but with this bike they have gone from a JLO to a OH NOOOO

(what have they done)